Dreieich, 13 January 2015 – Just in time for the start of the year, the latest version 3.4 of the email encryption add-in gpg4o has been released. Inspired by customer feedback and corporate needs, the update above all brings new features for administrators to improve and further simplify integration into the corporate environment. In addition, the new version takes into account many suggestions for improvement for users and has enhanced compatibility with other OpenPGP email encryption solutions. The aim of the improvements is a smooth deployment of the software in personal and business environment and thus the inclusion of e-mail encryption in day-to-day IT work.

In addition to the possibility of administration through Group Policies in Microsoft Policy Manager, administrators can now also specify the autoimport key server for all users centrally and thus centrally decide which public keys are made available to users. Thus, the potentially less safe manual import by the user himself can be eliminated. In addition, the list of usable public keyservers can also now be centrally managed. This means that compliance policies are easier to implement in the field of encryption, increasing the IT security of the company.

Simplified teamwork in the business environment

gpg4o now supports teamwork and team assistants, similarly to Microsoft Outlook. So employees can also send encrypted messages in the name of the team or a manager. This is done in the usual way via the “Send from” field in Microsoft Outlook. Accordingly, virtual accounts can be created, for which the correct public key is then available for transmission (Fig. 1). 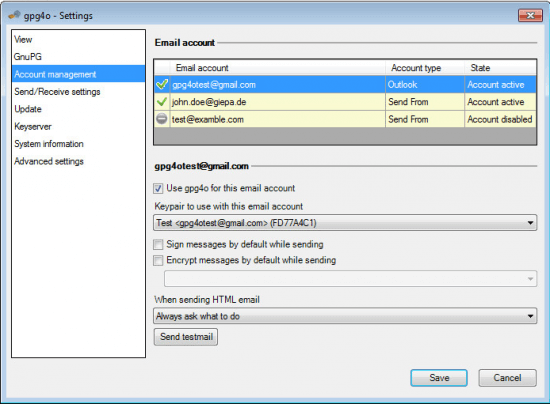 Compatibility with other OpenPGP applications

gpg4o 3.4 is now able to verify PGP/MIME signed e-mails properly, which means that compatibility is guaranteed with applications such as GPGMail. This simplifies the encrypted communication and thus generally ensures greater acceptance of encryption software.

In the current version, the user is also now given help by coloured backgrounds on the traffic light principle in view of existing keys, ambiguities and missing keys (Fig. 2).

The improved manageability, corporate functions for teamwork and numerous large and small improvements in user-friendliness makes gpg4o 3.4 the most mainstream version of the encryption add-ins to date.